Skip to main content
Got a spare 5 minutes to help us improve our website?
I'll do itNo thanks
10 min.

Amidst growing population pressures, who will feed Africa?

Africa’s population continues to boom, from 476 million in 1980 to 1.4 billion today to a projected 2.5 billion by 2050 and as much as 4.3 billion by 2100.[1] By 2050, two out of five newborns worldwide will be African; by 2100, one out of every two will be. The vast majority of these will be urbanites: already, more than four out of five of today’s new Africans will be city-dwellers. These demographic realities will force policymakers and the international community to contend with how to feed Africa's population. Food—one of the most crucial resources on the planet—is already a major item on the global agenda: the UN Food Systems Summit held in September 2021 was designed to set the stage for global food systems transformation and sustainable development for years to come. It has also been a testament to the challenges of addressing global hunger and food insecurity—in the past, having been criticized for lack of accountability in the sustainable development commitments of countries, companies, and organizations; and its failure to address the needs of vulnerable communities like those of smallholder farmers.

The paper makes unsettling observations about the economic and social sustainability of the farming sector, many of which are linked to the nature of African smallholder farms and the continent’s growing population. In short, smallholder farmers in sub-Saharan Africa are stuck in a productivity trap that limits their potential for economic development under current policy initiatives.

Africa’s smallholder farms, which approximately 300-million people rely on, are often food insecure, despite accounting for 80 per cent of Africa’s total food production.

To generate economic growth from agriculture, lift smallholder farmers out of poverty, and reduce food insecurity in these systems, farms ultimately need to become more productive. The paper suggests two pathways to achieve this: consolidation or intensification. For example, ‘Latin America is, of course, very special because of their history of consolidating farms’, explains Van Wijk, ‘so they never got split up in the way that happens in Africa or in Southeast Asia.’ In a similar vein, ‘Southeast Asia is very special as well’, but their farms, which are typically small, are also 'highly intensified, so their productivity per hectare and their inputs per hectare are incredible compared to what you see in most regions in Africa.'

The problem is a two-fold conundrum with no clear solution for sub-Saharan Africa: farms in this region are highly fragmented—and will further fragment under population pressures—complicating the issue of consolidation. At the same time, intensification is not economically viable in these smallholder systems because many small-scale farms lack enough land and labour to make intensification profitable. In addition to land fragmentation, cultural factors like the social significance of land for many smallholder farming families also inhibit the consolidation of farms.

The paper claims that there are few possibilities for smallholder farmers to 'step-up' economically and that, ultimately, Africa cannot deliver the economic growth necessary under current policy initiatives. The policies ultimately need to change and better address structural shortcomings for prospects to improve. However, that's easier said than done: 'it has to go hand in hand with enormous investments, and it's difficult to see where that money is available' Van Wijk remarks.

Beyond the productivity conundrum, there is also the matter of inadequate policy initiatives to support economic growth through agriculture, which further raises the question of how Africa’s population will be fed in future years. The paper suggests a need for pro-poor policies and investments that stimulate small-scale agriculture and greater focus on rural development.

It is also a question of ensuring that jobs outside of agriculture can absorb the sector's population. If the policies eventually change, structural adjustments are made, and farms become more productive, that still leaves a tremendous chunk of sub-Saharan Africa’s rural population unaccounted for. If population growth outpaces job growth, which it likely will, there simply won't be enough jobs to compensate, even if the proper changes are made.

In many parts of the world, intensification has led to more productive farms, but at the expense of agricultural jobs, a main source of livelihood for smallholder farmers in Africa. This partially explains why farms cannot yet be consolidated: there are few jobs to compensate for job losses. So where would farmers go? 'It's a horrible question to ask, and there is no easy solution unless you get the development of the urban centre', says Van Wijk.

‘It leaves farmers where they are now, in a very difficult situation’, admits Van Wijk, and ‘the irony is that they are responsible for most production in many countries, but they're sometimes highly food insecure themselves. It's only 5%-10% of the smallholder sector in many regions that has a future in farming if you take such an economic view.'

Van Wijk explains that there are exceptions. With proper investment in the agriculture sector, there can be economic development in regions with growing urban centres that intensify neighbouring farms. He also remarks that 30%-40 per cent of smallholder farmers have supplemental off-farm income, some of whom send their children to schools in larger cities, so they can find opportunities outside of agriculture. However, with the current population trends, Van Wijk cautions that ‘it is difficult to see which economies can really absorb all those new children.’

The development of urban centres is a promising response to the conundrum. Van Wijk gives the example of Mombasa, a coastal city in south-eastern Kenya. ‘If you look at Mombasa, the whole region around Mombasa, people can start intensifying and go for high value crops, vegetables, et cetera.’, he explains.

‘They go overnight to Mombasa, sell there on the market, generating cash to be able to intensify production on those farms, and then in principle, if such a good market connection exists, you can get proper living income on a relatively small farm area with pretty small livestock holdings, because you're able to set your own prices and you're going to sell regularly throughout the year. That’s where the big pull of those major population centres, Nairobi, Addis, Accra in West Africa, Lagos, et cetera, comes from—they can pull a whole region basically out of that degradation.’

Another solution the paper suggests is reorganizing global food systems by stepping away from globalized free trade agreements and towards more regional agriculture production systems, which seems like a radical alternative. ‘In principle, you want to walk away from the lowest price possible because you’re in a global system competing with everybody, and the most efficient production systems will determine what the price will be’, he explains, which can be detrimental to comparatively inefficient local production systems.

Unfortunately, this is no easy feat either, 'but it is a way to protect these types of relatively inefficient production systems', he insists. 'If for meat, you have to start competing with say, Brazil or Argentina, Australia, New Zealand… it becomes be very, very difficult. So, you can localize it or regionalize it. Then, you could protect these—relatively speaking—inefficient systems which enormous numbers of livelihoods are dependent on.’

The political feasibility of this level of structural change is not so clear either. Urban populations, which are rapidly expanding in many countries, are also food insecure. Naturally, they want their food to be as cheap as possible, but rural populations, which remain the majority in many countries, naturally require a good price for their agricultural produce. ‘Because of that imbalance’, says Van Wijk, ‘soon more than 50% of the population in low- and middle-income countries will be in urban centres, and that power shift is taking place at the moment, and will play out in terms of what policies will be in the future.’

Nevertheless, Van Wijk cautions against feeling overly pessimistic about the future of farming in sub-Saharan Africa. ‘In developed countries, you see those regionalized initiatives, regionalized production’, he explains.

'You see very specific activities changing substantially, how people look at food, how people value food and taking much more perspective on where food comes from, so there's a lot within the system type of change, which is going to happen very quickly.'

'If countries are growing 6-7 per cent economically, outpacing population growth rates, a lot of other things are possible, and automatically, the agricultural sector will be pulled up together with those economic developments.’ He presents Ethiopia as an example.

‘If you see how much Ethiopia has grown over the last ten years, it is absolutely incredible. Rates of 10, 12, or 13 per cent per year economic growth,’ he describes, which automatically leads to investment in the agricultural sector. ‘Those are ways these types of systems can develop and intensify and improve. But economic growth has to outpace population density growth by a large margin.’ However, political stability is a key factor to be taken into account, which makes that this economic example of Ethiopia shows how easily things can turn around for the bad.

Smaller-scale policy measures to support smallholder farmers can also make a tremendous difference in food security. The paper suggests providing a universal income for people lacking the means to support themselves, more healthcare, and better education—particularly for girls. Access to better education can also contribute to a reduced population growth rate. ‘That’s where public investment is very much needed. But it’s an exercise of long, long term investment where if you now start investing in education, you will see the effects in twenty years, not five.’

What it comes down to for the future of feeding Africa's rapidly growing population, is a need to industrialize—this is what will allow economies to grow and allow small-scale farms to become more productive, not a popular perspective in many areas. 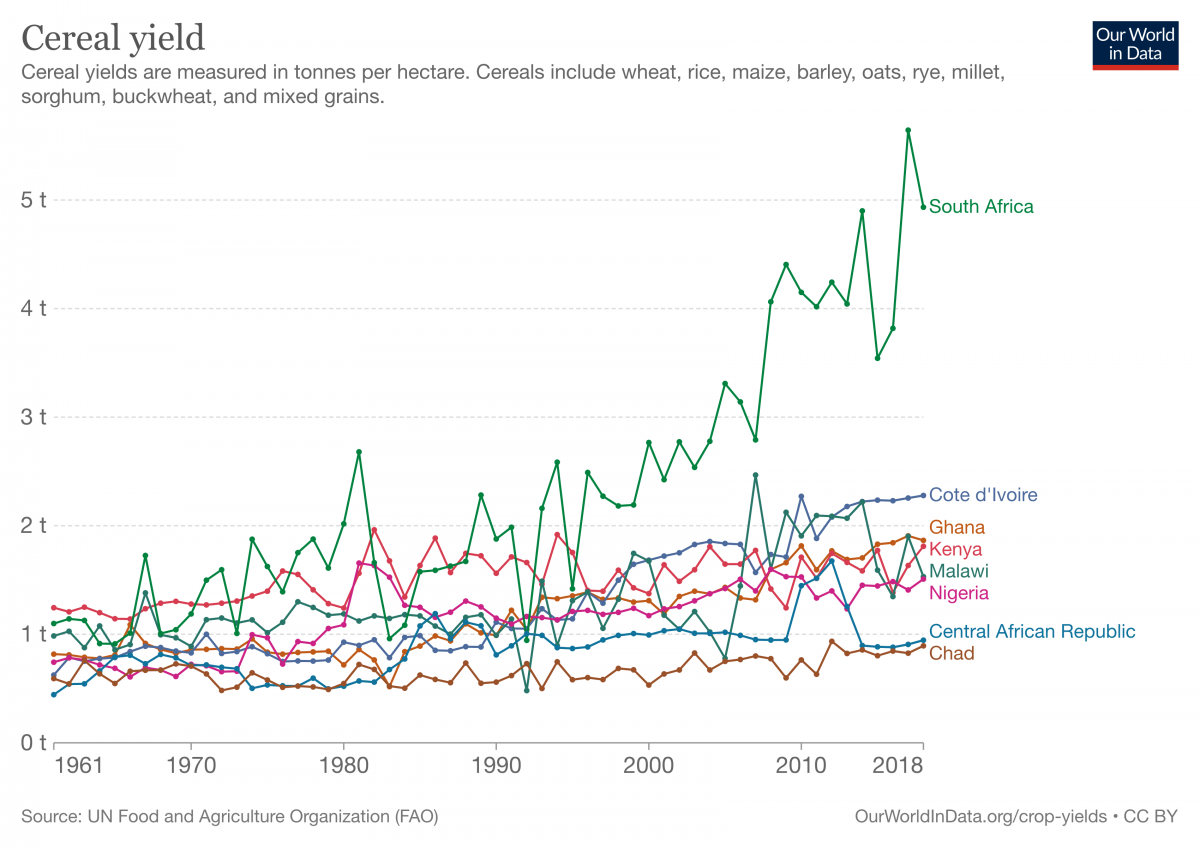 [1] Other projections suggest lower numbers: The UN projects 3.8 billion, the IHME projects 3.1 billion, and IIASA is the lowest at 2.6 billion.

Click here to read The Future of Farming: Who Will Produce Our Food

Opportunities for Africa to address all forms of malnutrition: How can the UN Nutrition Strategy 2022–2030 contribute?

END_OF_DOCUMENT_TOKEN_TO_BE_REPLACED

This three year project will run as part of the One CGIAR initiatives and will focus on seven interrelated outcome areas, namely: Characterization of ecological adaptation of chicken ecotypes and identification of farmers trait preferences Strengthening of existing partnerships and developing new...