Skip to main content
Got a spare 5 minutes to help us improve our website?
I'll do itNo thanks
3 min. 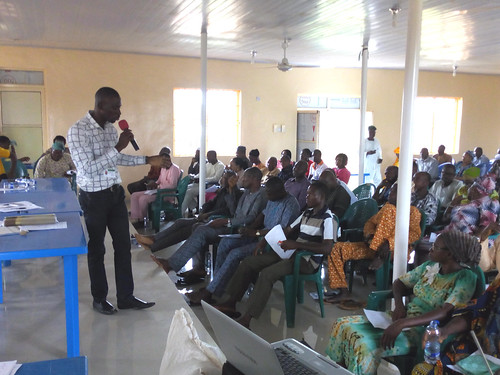 Participants in an executive meeting of the Poultry Association of Nigeria in Ibadan, Nigeria, in late March 2018 (photo credit: ILRI/Yinka Olasusi).

Hundreds of Nigerian chicken farmers in the southwestern state of Oyo have expressed interest in using cassava mash in poultry feeds. Common animal feed ingredients—such as maize and soya beans—are increasingly expensive in the country. Many small-scale poultry farmers and commercial feeds producers are searching for lower-cost alternative ingredients which would reduce poultry feed costs without adversely affecting the performance of the birds. In two meetings of the Poultry Association of Nigeria (PAN) in late March 2018, many farmers said they feel they may have found a viable low-cost high-quality alternative in the cassava mash.

The benefits of cassava peel-based livestock feeds in Nigeria, the world’s largest producer of the root vegetable, have been clearly demonstrated in the country. In 2015, CGIAR scientists developed low-tech ways of transforming wet cassava peels into high-quality, safe and hygienic feed ingredients within eight hours, producing one tonne of cassava peel mash from three tonnes of wet peels. Among the benefits of producing three million tonnes of feed from cassava peel annually, says CGIAR scientists, is the elimination of 10 million tonnes of environmental harmful pollutants and the creation of 100,000 jobs, bringing the total benefit to nearly one billion US dollars.

A partnership between the International Livestock Research Institute (ILRI), the global non-governmental organization Synergos and the International Fund for Agricultural Development (IFAD) led to the creation of cassava peel processing factories in Nigeria turning what was once an environmentally harmful waste product into high-quality cassava peels meal (HQCPM®) mash.

The benefits of using the mash as a chicken feed ingredient were demonstrated to more than 600 farmers who attended an executive committee meeting of the PAN in Ibadan and a PAN zonal meeting in Ogbomosho on 28 and 29 March 2018. Among other characteristics, the high-quality cassava peel mash contains 3-4% crude protein, 2,200 kcal/kg metabolizable energy and 8% crude fibre. Results from field trials done on both broilers and laying birds in the country have shown good performance at a 17.5% inclusion of HQCPM in poultry diets (32% replacement of maize).

According to ILRI researcher Olajire Oladapo, farmers would save USD15 on every tonne of chicken feed produced by using HQCPM instead of maize which currently costs USD291 per tonne. ‘This would be a significant saving for farmers with over 3,000 birds using up to 10 tonnes of feed a month,’ he said.

Four new HQCP mash processing factories have been set up in Niger, Benue and Kogi states to meet increasing demand for the product. ILRI and partners are also carrying out additional training for organizations and farmers across the country on the processing methods, feed formulation and economic value addition of the high-quality cassava peel mash.

Read related stories on the use of cassava peel as livestock feed in Nigeria:

Missing puzzle piece for the origins of domestic chickens

Food systems transformation: An African perspective of where we are and where to next

END_OF_DOCUMENT_TOKEN_TO_BE_REPLACED

Mali's Mopti region is endowed with immense water and land resources generating for livelihoods for millions of families. The availability of these resources made the region an ideal environment for a thriving ruminant livestock farming. However, the region has recently been the scene of violent...

Objectives Improve dairy production in Burundi by facilitating access to modern animal husbandry practices. This include strengthening the country's capacity for disease surveillance and control, accelerating genetic improvement through artificial insemination, and introducing improved and nutrient...