On September 27th, the phase two launch of the Centre for Tropical Livestock Genetics and Health (CTLGH) took place at the International Livestock Research Institute (ILRI) campus in Nairobi. CTLGH is a global research alliance bringing together various partners, including the Roslin Institute of the University of Edinburgh, Scotland’s Rural College (SRUC) and ILRI, in pursuit of research-driven solutions that address the challenges of food security, health, and gender equity through improved livestock-based livelihoods in the tropics. The launch event served as a moment to reflect on the successes of phase one and outline how those successes can be built upon in phase two. 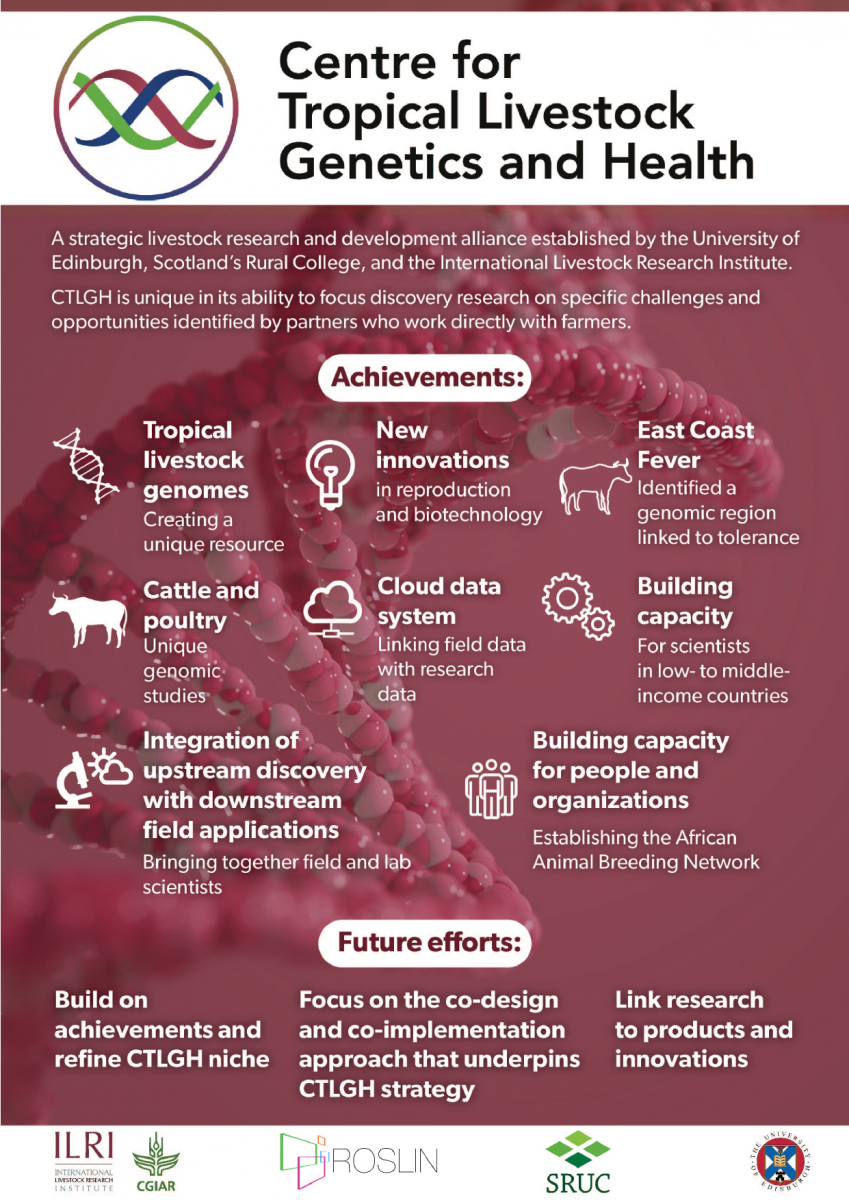 ILRI director general Jimmy Smith provided the welcoming remarks. Smith noted that as the global population grows, we will need to produce 60 per cent more food by 2050, primarily through productivity gains. ‘CTLGH was created to harness science for downstream applications, so we can increase the aggregate supply of food and improve nutrition’, said Smith. He also highlighted CTLGH’s ability to drive institutional innovations through partnerships that ‘get institutions in the North to work with development institutions in the Global South’.

Next to speak was Harry Kimtai, Principal Secretary State Department for Livestock, Ministry of Agriculture, Livestock, Fisheries and Irrigation in Kenya. Kimtai expressed his satisfaction with CTLGH’s first phase which developed technologies for improved livestock genetic improvement with the potential to improve food and nutrition security in Kenya. He said that he is optimistic that the second phase investment in CTLGH by the UK Foreign, Commonwealth and Development Office (FCDO) and the Bill & Melinda Gates Foundation (BMGF), will continue producing scientific knowledge that can help governments develop more successful and targeted livestock policies.

Appolinaire Djikeng, director of CTLGH, then spoke about the importance of CTLGH’s partnerships. ‘Those attending this launch come from nearly every continent on the planet’, he noted, all working together to address global challenges surrounding animal agriculture, hunger and poverty. Although cows in Kenya produce on average just 1/10 of those in developed economies, said Djikeng, CTLGH partnerships are leading to innovations that will increase livestock productivity in the developing world, and in turn, help address hunger and poverty.

Following Djikeng was a series of presentations about CTLGH’s influential research. Phil Toye of ILRI highlighted ILRI’s work with the Roslin Institute to address East Coast Fever by locating a genetic marker of ECF-resistant cattle. Mike McGrew of the Roslin Institute spoke on CTLGH’s technological innovations which can be used to introduce beneficial genetic variants into chickens. Finally, ILRI’s Chinyere Ekine noted that synergies between the ADGG project and CTLGH have led to the identification of livestock genetic variants associated with productivity and resilience that can be incorporated into national breeding schemes. This initiative will drive genetic improvement in smallholder systems in Tanzania and Ethiopia.

After reviewing the successes of CTLGH’s first phase, the focus of the event shifted towards phase two and which will support CTLGH in the delivery of its 2030 strategy. Phase two will work across three platforms—research and development, partnerships and collaboration, and capacity building and knowledge exchange—covering a range of topics including reproductive technologies and functional genomics, breeding, genetic characterization of key tropical livestock traits and phenomics for tropical livestock systems. The overall mission of phase two is to build upon the work already done in phase one by extending into upstream and downstream partnerships to identify the needs of smallholder farmers and develop technologies to respond to them.

Closing remarks were provided by David Argyle, Acting Vice Principal and Head of College for Medicine and Veterinary Medicine, University of Edinburgh, Wayne Powell, CTLGH principal, Principal and Chief Executive, SRUC, and Julius Court, deputy high commissioner and development director at the British High Commission, Kenya. They all expressed their excitement about the future of CTLGH and its ability to broaden and leverage new partnerships to ‘harness upstream research for downstream impact’. As CTLGH moves into phase two, they believe it will continue to grow its on-the-ground impact, leading to improved smallholder livelihoods and contributing to the SDGs.