Skip to main content
Got a spare 5 minutes to help us improve our website?
I'll do itNo thanks

Investigating pathogens in wildlife in Kenya to tackle neglected zoonoses

Wild animals harbour many pathogens that can infect livestock and people. Because of this, epidemiological studies on these pathogens should include wildlife sampling to generate data on their distribution patterns in natural ecologies. This has been the overriding interest under the Co-infection project, which is led by the International Livestock Research Institute (ILRI). It uses a collaborative, multisectoral, and transdisciplinary approach to determine the burden of Rift Valley fever, Q fever, and brucellosis in livestock, wildlife, and humans in Kenya.

Collecting samples from wild animals in their natural habitat can be both a rewarding and challenging experience. In this blog, we share experiences from our recent survey conducted between 28 October 2021 and 16 March 2022 in Isiolo, Meru, and Samburu Counties, where we collected blood samples from 200 wild animals.

The wildlife sampling team, which is led by the Kenya Wildlife Service (KWS) and the Wildlife Research and Training Institute (WRTI), comprised of veterinarians, research scientists, capture rangers, veterinary technologists, and drivers. All the personnel are trained to handle wildlife and they follow international guidelines for the humane capture and handling of animals. 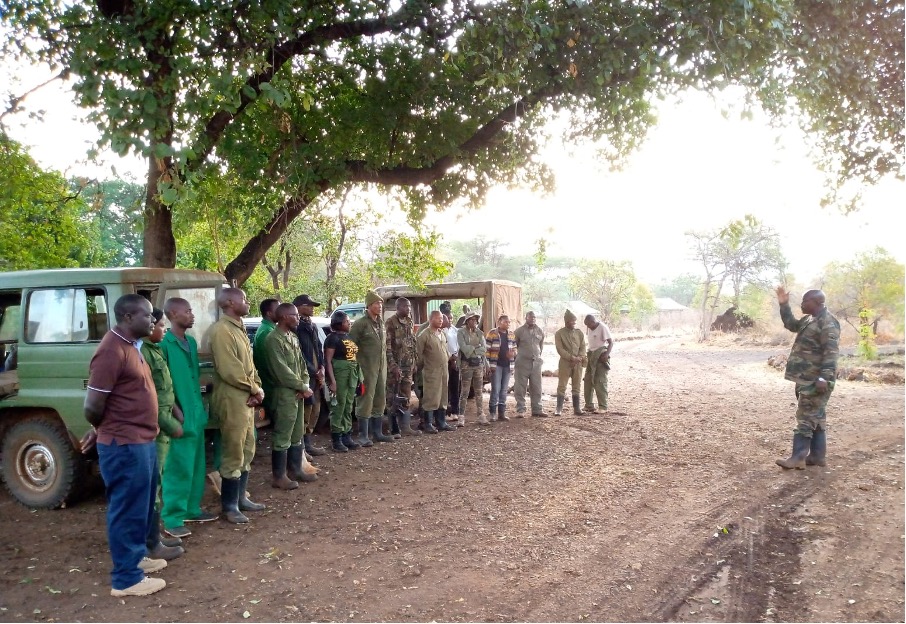 The morning parade where the team plans for the day’s activities (photo credit: KWS/Bernard Rono).

Each sampling day began with a morning parade of the team members, for prayers, briefing, strategizing, and delegation of roles. Planning is important in such a demanding exercise, which has its unique challenges and fulfilling experiences.

For instance, despite putting in place strategies to improve safety and achieve the goals of the survey, the unpredictable distance covered while searching for the targeted wildlife species was a major challenge. In such instances an aircraft was used to locate the wildlife for the ground teams. After locating target species, the team used various methods of capture depending on the species and the terrain of the area. Physical methods such as nets or chemicals were used to restrain the animals. Darting using chemicals was one of the main ways that was used to improve the capture of animals, especially buffaloes and giraffes.

There are unforgettable moments during sampling, such as when the team came across a python while following a darted buffalo and encountered a pride of lions that was targeting a giraffe that had been darted for sampling.

Some animals used remarkable survival strategy to escape sampling and moved to areas with poor terrain for safety. Shy animals like the water buck once darted, hid in the thickets to escape sampling. The team had a rough time tracing these smart animals.

Special linear nets were used for trapping animals like warthogs during the day and impala during the night. The team would strategically set the nets across known pathways and then drive around to chase the animals towards the direction of the net. The animals would then hit the net and get trapped. The team proceeded to collect samples before safe release. 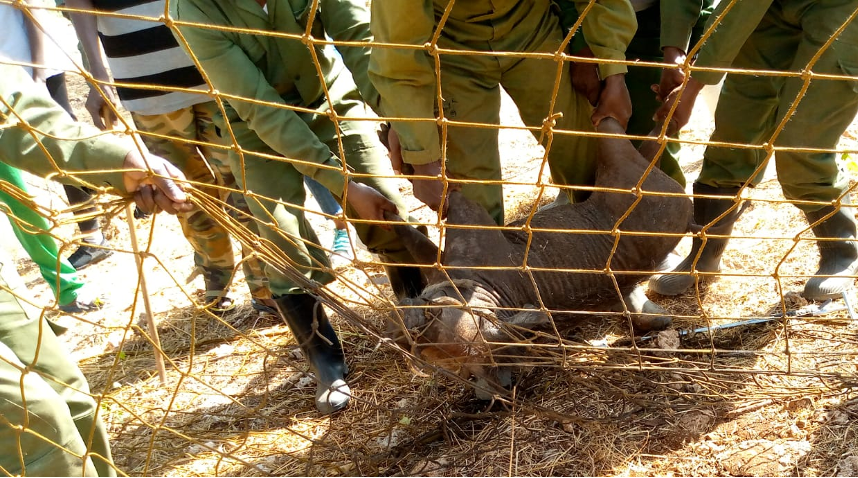 Safe removal of a warthog from the net for sampling (photo credit: ILRI/James).

On several occasions the team had to work together without losing focus on the target of the mission to push vehicles out of ditches when they got stuck or clear felled trees blocking paths. 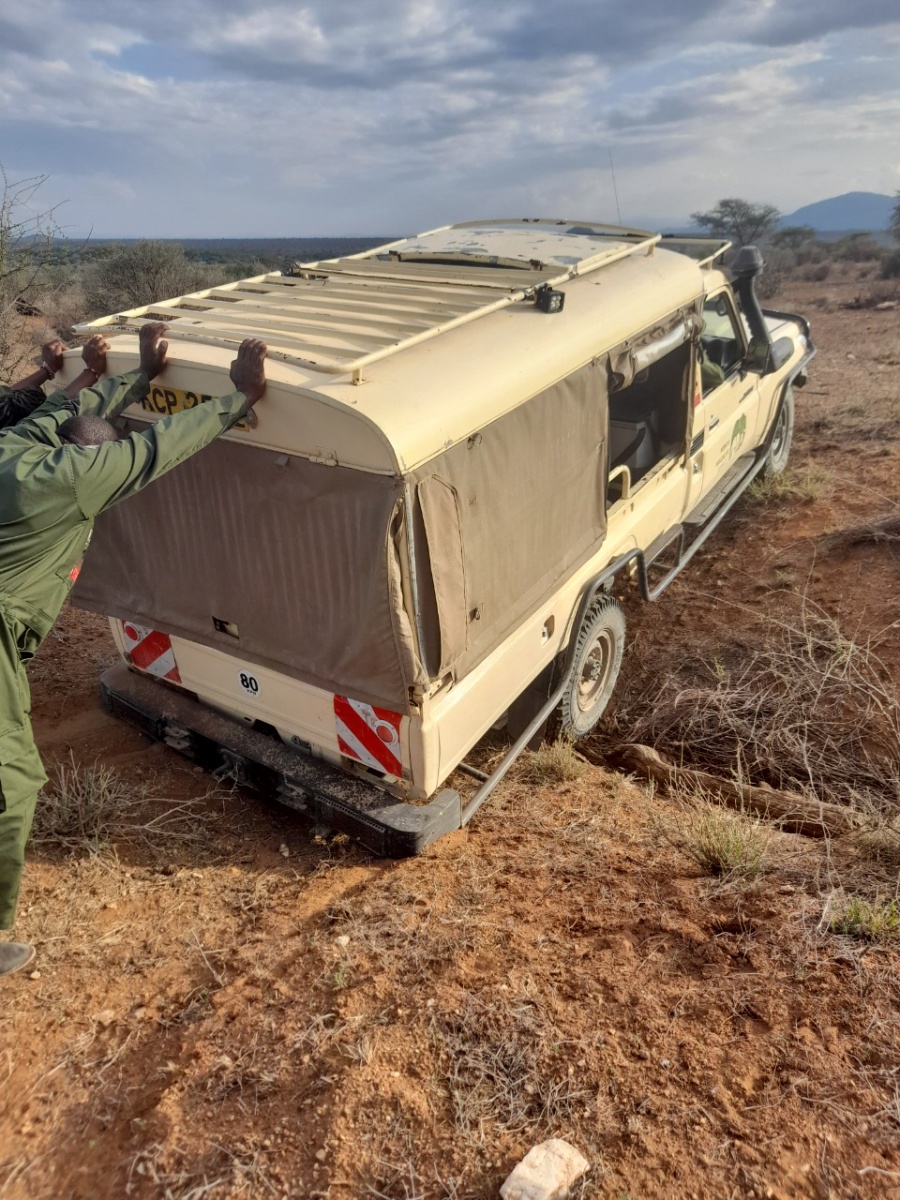 Team pushing a vehicle out of a ditch (photo credit: ILRI/Nelly Bargoiyet). 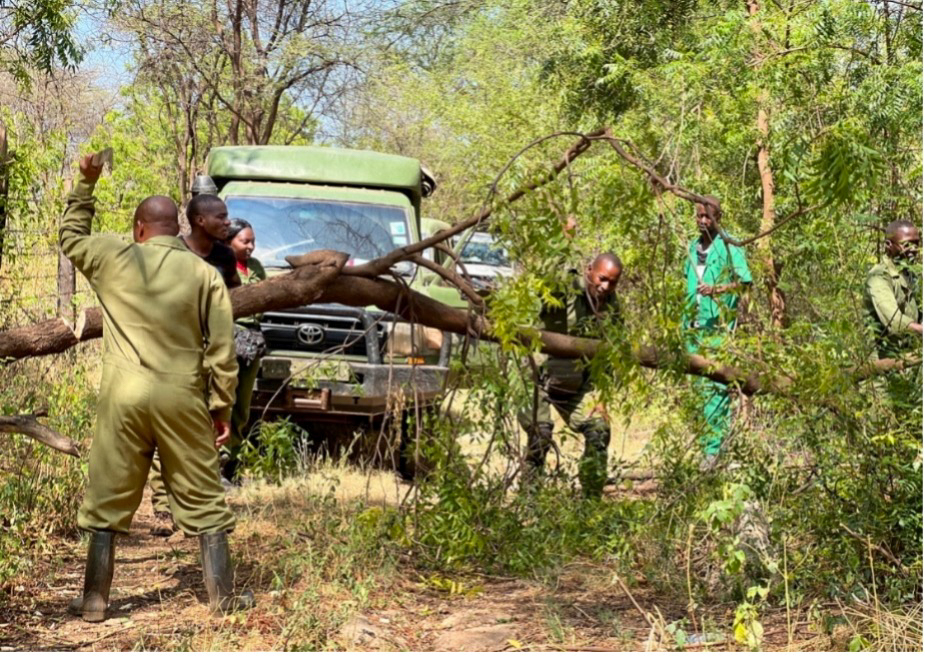 The majestic beauty of Meru National Park with its striking scenery, such as the Murera springs, kopjes, rugged wilderness and multiple rivers traversing the park, awed the team. The beauty managed to turn frustrations into satisfaction. The team also enjoyed seeing diverse wildlife species such as rhinos, lions, elephants, and cheetahs in their natural environments. 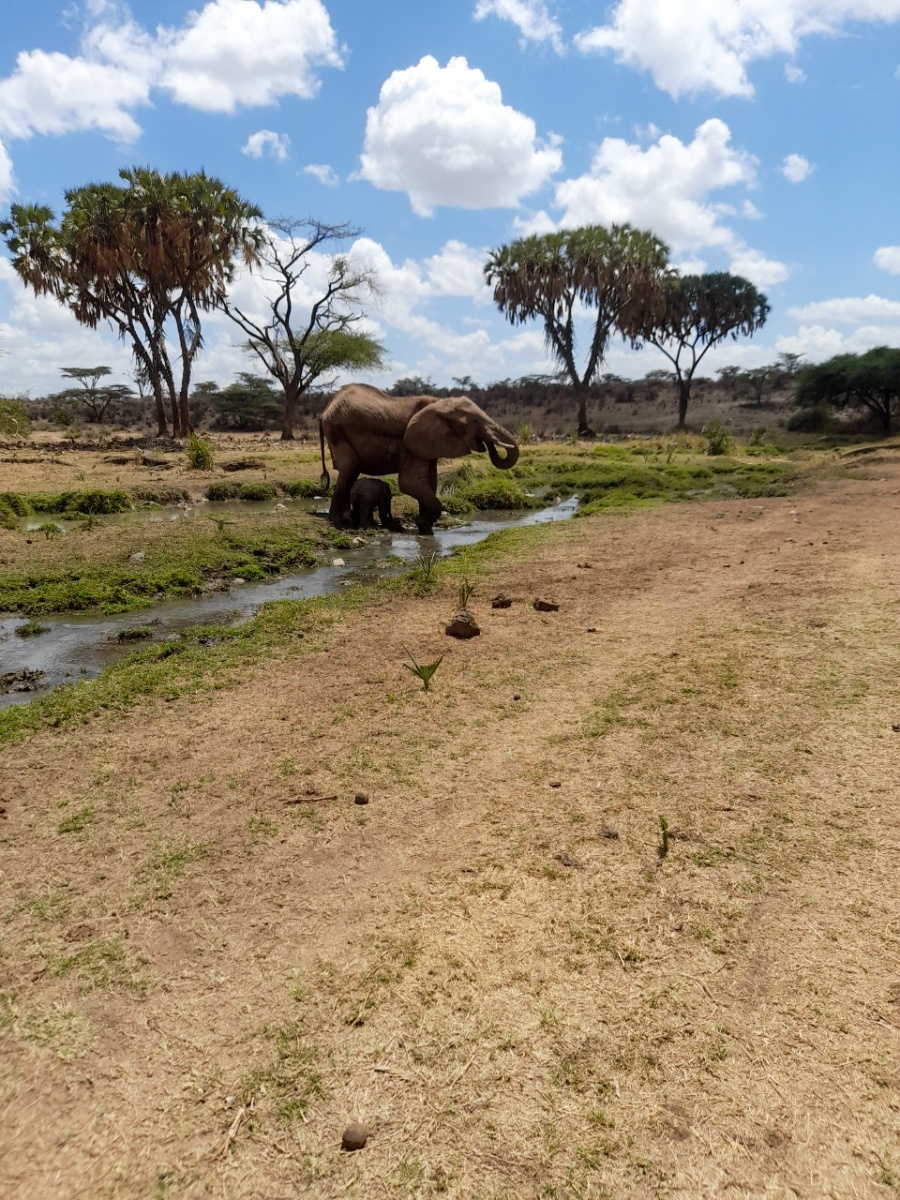 Unlike livestock sampling, where the duration between sampling the first animal and delivery of the samples to the labs is predictable, the wildlife sampling work presents unique challenges in handling collected samples. To tackle this challenge, the team brought along coolers with ice packs and liquid nitrogen tanks for preserving the collected samples to ensure their viability and integrity after the exercise and during transportation to the lab. 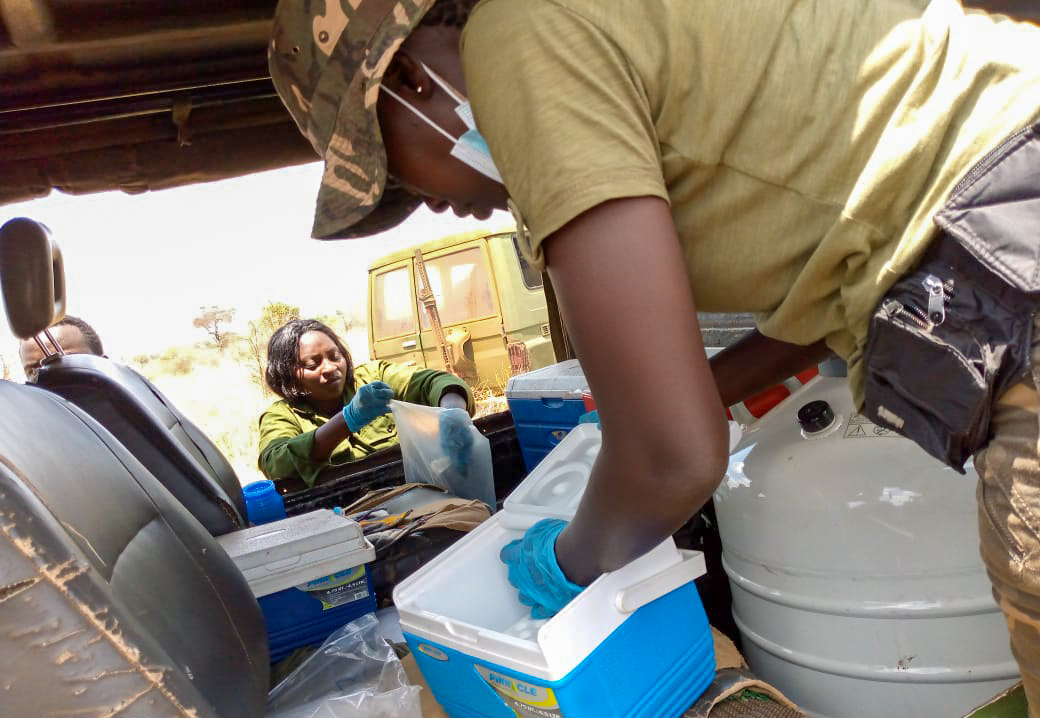 Benefits of the study

This activity is part of a bigger project that is being implemented by a multidisciplinary team of researchers to establish the prevalence of the three pathogens in wildlife, livestock, and humans. Blood and serum samples that have been collected are being tested for the presence of antibodies against brucellosis, Q fever and Rift Valley fever. The samples will also be subjected for further analyses to characterize these pathogens using molecular tools to determine their genetic relatedness with those that are often found in livestock and humans. This activity will help to identify wild animals that play a role in maintaining the pathogens of interest to aid the development of risk-based surveillance work at the KWS. More work is also being done to determine pathways that these zoonotic pathogens from wildlife spillover to livestock and humans so that preventative measures are instituted in the area. Local communities are being involved in various ways, such as through participatory rural appraisals for them to understand how to manage these risks while participating in biodiversity conservation efforts.

Partners of the project include the Kenya Wildlife Service, Wildlife Research and Training Institute, Washington state University, University of Nairobi, Kenya Medical Research Institute, Los Alamos National Laboratory in the US, and the Zoonotic Disease Unit.

Approvals for livestock and wildlife sampling have been obtained from the Wildlife Research and Training Institute in Kenya, ILRI’s Institutional Animal Care and Use Committee (AICUC), as well as the United States Army Medical Research and Development Command (USAMRDC) animal care and use review office.

The ILRI led project ‘Co-infection with Rift Valley fever virus, Brucella spp. and Coxiella burnetii in humans and animals in Kenya: Disease burden and ecological factors,’ is sponsored by the United States Defence Threat Reduction Agency (DTRA). The content of the information does not necessarily reflect the position or the policy of the federal government and no ooficial endorsement should be inferred.

END_OF_DOCUMENT_TOKEN_TO_BE_REPLACED

The project provides explicit impact estimates and ranking for a range of farm-level antimicrobial resistance interventions in Senegal, highlighting where future research could be most valuable in understanding intervention efficiency from a One Health perspective. Objectives Establish a consortium...

Protecting human health through a One Health approach

COVID-19 is the sixth zoonotic pandemic since 1980. The frequency and severity of these events is increasing as people encroach on wildlife habitats, and livestock and fish production systems intensify. Animal production systems are reservoirs of zoonotic pathogens, which are responsible for 60% of...

Most rural households in Zimbabwe and Malawi depend on smallholder agriculture and livestock husbandry to meet food and nutritional security goals and improve their livelihoods. However, due to the low level of public and private investment in the livestock sector, livestock-keeping households...