Launched in 2018 to support the Feed Africa Strategy of the African Development Bank, the ‘Technologies for African Agricultural Transformation’ (TAAT) initiative aims to increase food production in the continent by 120 million tons per year contributing to lifting about 100 million people out of poverty. The initiative is working to scale up agribusiness opportunities across 9 value chains—maize, cassava, rice, beans, wheat, sorghum, millet, orange-fleshed sweet potato and livestock—in 27 countries.

The International Livestock Research Institute (ILRI) leads the TAAT livestock compact, members of which recently met with a USD500-million public-private partnership in Nigeria established to ‘de-risk’ agricultural financing. The Nigerian Incentive-Based Risk Sharing System for Agricultural Lending (NIRSAL) organization works to provide many of the actors along the country’s agricultural value chains with affordable financing. TAAT is targeting 3–5 million farmers in the country. 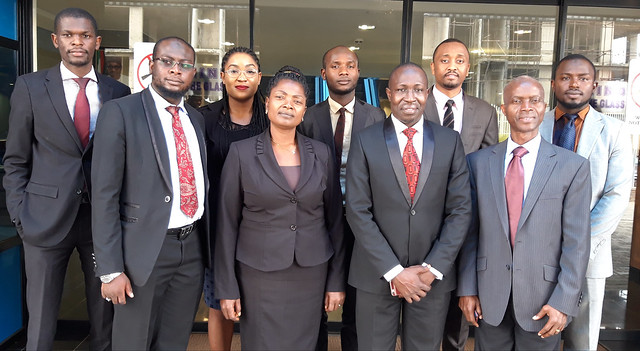 Led by Adeniyi Adediran, who coordinates the TAAT livestock compact and works with the Impact at Scale program at ILRI, the TAAT livestock team met with officials from NIRSAL on 7–8 Aug 2018 to identify business models and set up financing frameworks that will facilitate access to finance for smallholder farmers interested in adopting proven livestock technologies using the NIRSAL financial framework. Specifically, the meeting focused on:

At the meeting, Adediran gave an overview of the TAAT livestock compact. He explained the advantages of using improved local poultry breeds such as the Shika Brown, a layer strain popular in Nigeria for its hardiness and large brown eggs, persistent egg production and high feed conversion efficiency, and FUNAAB-Alpha, a breed with improved meat and egg productivity. Adediran also described the benefits of using thermostable rather than thermolabile livestock vaccines, especially in rural areas where it is difficult to maintain the cold chain due to poor electricity grid.

The TAAT livestock compact coordinator also gave a presentation prepared by Amole Tunde, ILRI’s representative in Nigeria, on the costs and benefits of feeding livestock high-quality cassava peels (HQCP), the technology which is based on research conducted in Nigeria by ILRI and its CGIAR sister organization, the International Institute of Tropical Agriculture (IITA). Use of the HQCP technology could help solve two big problems: managing the environmental waste of cassava peels and reducing the need to import maize for livestock feed. 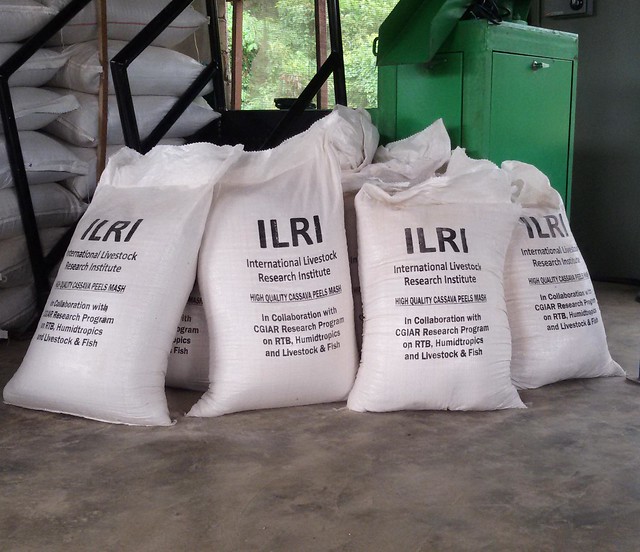 Other modern products and practices of interest to commercially-oriented smallholder livestock producers, including youth and women entrepreneurs, were presented. These included other improved breeds of traditional chickens, medium-scale broilers and cockerels; establishment of small-scale hatcheries; chick brooding; point-of-lay chickens for egg production; vaccines, dewormers and other poultry health products; and value-addition livestock product processing technologies. Technologies specific to the development of the small ruminant sector were also discussed and included improved genetics, including the use of high-performing breeds such as the Yankassa and Sahelian sheep and the West African dwarf and Sahelian goats; other livestock feed innovations; and improved livestock fattening practices. The use of prefabricated livestock shelters and the set-up of slaughter and meat processing facilities also featured in the presentations.

The NIRSAL team expressed interest in supporting only proven technologies that could significantly improve the productivity and incomes of farmers. Those initially considered for selection for promotion by NIRSAL included scaling up distribution of the Shika Brown chicken and improved breeds of broilers as well as improved vaccines, feeds and processing methods, the latter including mobile chicken processing units.

Participants assessed the commercial viability of these technologies and developed roadmaps and action plans with timelines for the next steps in the collaboration. NIRSAL will develop business models for the selected technologies and work with compact partners and farmers to begin their scaling up.

The Aug 2018 meeting was a follow up to a previous NIRSAL–TAAT consultation held in Jun 2018 to discuss how the two initiatives could jointly facilitate greater access to capital for economically viable agribusiness. This partnership aims to widen access to finance for commercial livestock enterprises and supports ILRI’s work to improve food security and livelihoods through livestock.

Missing puzzle piece for the origins of domestic chickens

Food systems transformation: An African perspective of where we are and where to next

END_OF_DOCUMENT_TOKEN_TO_BE_REPLACED

Funded by the Bill & Melinda Gates Foundation, the Agriculture to Nutrition (ATONU) project seeks to help the African continent broaden its agricultural focus from ‘eating for hunger’ to ‘eating for health’. It focuses on how agriculture can deliver positive nutrition outcomes for smallholder...

Research questions What is the net GHG balance for agriculture across Vietnam and where are emissions hotspots? What is the potential for mitigation, and where are the mitigation hotspots for rice landscapes? How do mitigation priorities and opportunities differ across farmscapes (e.g. Mekong delta...